They say that todays architecture should be all about ecology and green, self-sustainable projects. But what does it really mean? How should this subject be approached? This contemporary fairytale dream house is a very good example of both ecological architecture and style.

Designed by the Denieuwegeneratie Studio in Amsterdam and located in a nature reserve, hilly area, this fairytale dream house emerges from a hill to minimize disturbance and offer privacy. The hill itself was not a given and you might think that it was a rather too big an effort just for a house which could have been build anywhere else. Well, this gesture is sustained by the clients demand for keeping his footprint with the house to a minimum. By comprehending the building, the hill offers both insulation during cold weather but also intimacy to its inhabitants by acting as a natural isolator (the north facade is completely hidden from view).

Naturally, there are concrete walls (on the north, east and west sides) that separate the hill from the house’s contemporary home styled interior and retains its mass. For the south side though the architects chose to open the house as much as possible offering a great amount of illumination. Taking advantage of the natural construction materials nearby, the constructors have made the window frame out of lark wood, forested from the surroundings. The project incorporates the idea of a home. In this sense, the interior wall was left unfinished and each room was decorated by its occupants. Each room expresses a different opinion, a different style and brings individuality to the design. The rooms themselves show a lack of order and have been stacked randomly. They are built out of light wooden structures allowing so future changes: redecoration and even the removal or addition of a room, giving the family the chance to accommodate the building to theirs specific needs. This is what a home should be all about.

The design is an experiment in sustainable strategies in both architecture – the hardware – and the technical installations – the software – which have been designed by Arup Amsterdam. The software idea refers to photovoltaics, LED lighting, wood pellet heating in combination with low temperature heating, CO2 monitored ventilation, a gray water circuit and the use of smart domotics. The outcome is a house in which the total amount of energy produced exceeds its consumption.

Much more impressive than its Eco-friendly attributes is the design which quite amazing because it expresses both tradition and modern styling, uniting these two currents into one contemporary fairytale dream house. 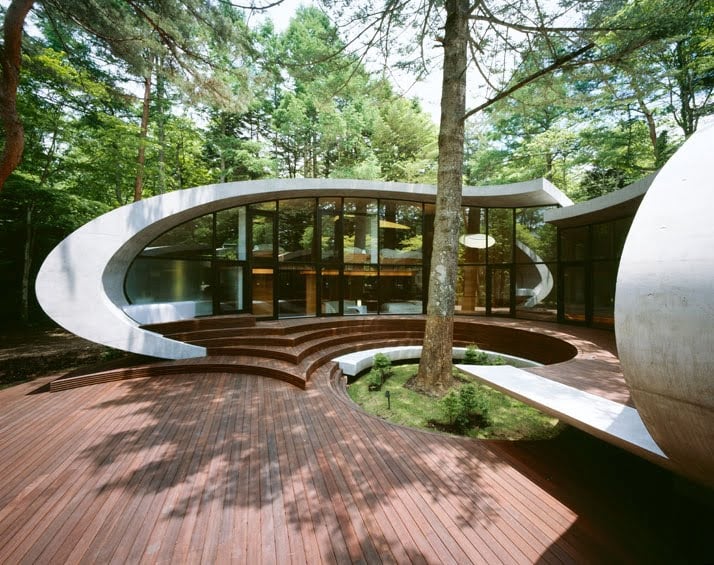 Shell House in Karuizawa by Kotaro Ide, Organic Home in the Forest