Isolated from the community sits The Long Studio, courtesy of Todd Saunders of Norway. They have completed the first of a six series of studios on Fogo Island off the coast of Canada. The area is dominated by fisherman’s houses so they approached the construction in a similar way: the studio sits on slits and is built out of rough-swan pine and whitewashed spruce on the interior side. The compartmentalization is made out of three spaces: an entrance porch, a courtyard and the actual studio space. All of the necessarily utilities have been recessed into the wall. If you want to visit it you have to take a ten minute walk from the community.

“Fogo Island lies outside of Newfoundland, Canada and is home to a gentle, independent people who have lived for centuries between wind and waves in pursuit of fish. Fogo Islanders live in the untamed landscape of the North Atlantic. The people are subtle and unpretentious yet have seen their traditional way of life by threatened by forces largely beyond their control.
Fogo Island is an elemental place of subtle and abiding beauty – a place where time is not obliterated by the circulation of everything. Its people are inextricably bound to this place where they belong. They are a culturally rich and resourceful people who live in close connection with each other and with their people who have come before.
The Shorefast Foundation works with the people of Fogo Island to find ways to preserve this special place and this special culture. We have chosen to find new paths by leading with the arts. We want to create structures that respect where we’ve come from and dignify this landscape that is so fragile yet so fearsome. We want structures that touch our imaginations and help maintain a connection between our past and our future.

The concept of the long studio responds to the transition of the seasons. The studio is organized in a linear from that consists of three different spaces. An open but covered area representing the spring marks the entrance to the studio and the beginning of the seasonal activity. The central portion is left open and mostly exposed to be fully immersed in all that is offered by the long summer days on Fogo Island. The end and main body of the studio is fully enclosed to provide an area of protection and solitude from the outside environment while still providing a connection to the landscape through a strategically framed view of the dramatic surrounding.

The long linear structure of this artist studio maximizes the amount of open wall and floor space. Large windows at either end and a skylight on the roof of the studio allows the maximum amount of natural light to flood the space. We have made one of the walls 1m deep to house storage, toilets and washbasins, with doors that are flush to the wall, thus avoiding any visual distraction inside the space.

The studios are placed on pillars at the end towards the sea, while the entrance area has a small concrete foundation for anchoring the construction to the landscape. With this type of construction, the studios can be placed in almost any place on the island. In addition, this allows for the studios to be pre-fabricated in a local workshop during the winter months, and then placed in the landscape in the spring.” 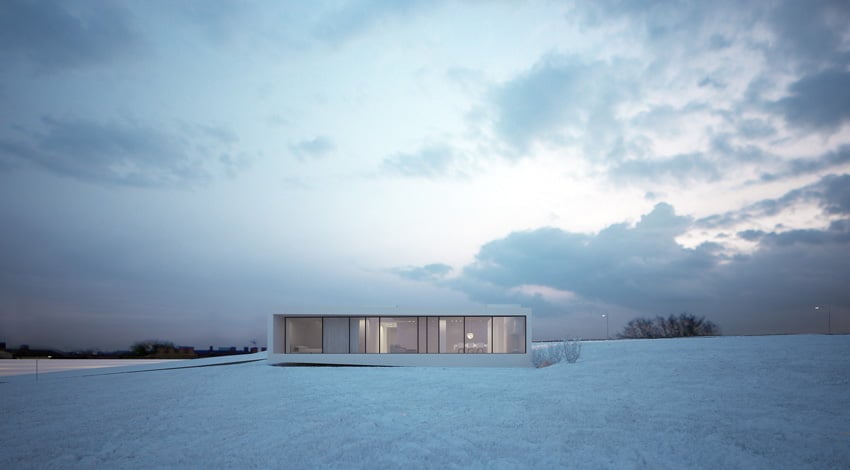 Minimalist Mansion in the Icelandic Plane-Reykjavik House by MOOMOO Architects