Whether you need to stave off the summer heat, work on remodeling projects, or dry shampooed carpets, a floor fan offers an all-in-one solution. These fans are portable and are better than ceiling fans because they don’t need permanent installation.

However, not all floor fans are made for the same purpose. Even models made by the same brand can have distinguishing features that make it unique from its counterparts. In this article, we will discuss and compare the three fans manufactured by Lasko. Find out the key differences between Misto 7050, Max Performance U15701, and Lasko Blower Fan 655704. 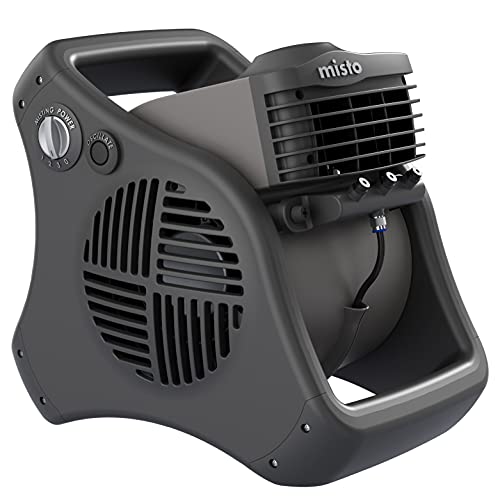 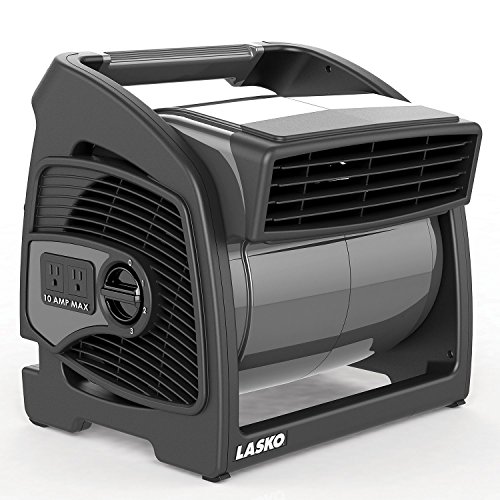 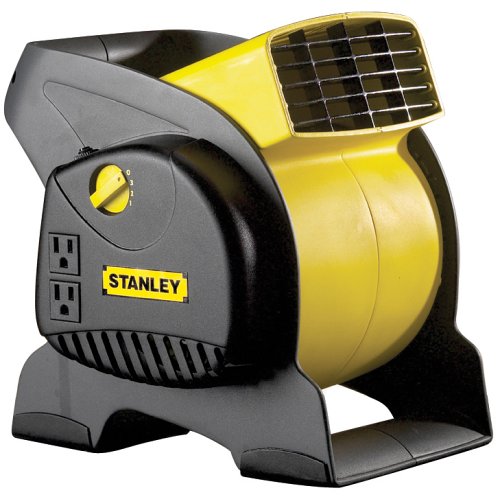 All of the three, Misto 7050, Max Performance U15701, and Lasko Blower Fan 655704, are powerful floor fans. However, the Misto 7050 floor fan has an extra feature besides its strong airflow, known as water misting. Since the fan has a good reach, it can easily disperse moisture to cool the surrounding environment. Furthermore, the unit is built for stability and is easy to assemble.

On the other hand, the Lasko Max Performance U15701 is more powerful and pushes air at an impressive rate. The fan comes with a dial knob, which allows users to the flexibility to change the fan speed according to their needs. Moreover, its long power cord gives users flexibility in terms of placement.

Lastly, the Lasko Blower Fan 655704 provides users with two different kinds of airflow, which can be either stationary or oscillating. Lasko also includes a pair of built-in grounded outlets in the floor fan. As a result, you can plug a light or a radio while enjoying fresh air from the floor fan.

Performance-wise, all three of the floor fans are great. However, they are unique in some aspects, and you can buy any one of them according to your preference.

As we have mentioned before, the Lasko Misto 7050  has a unique misting function. This feature allows the floor fan to shoot a fine spray of water as far as 10 feet away. The increase in moisture levels results in a significant decrease in temperature. 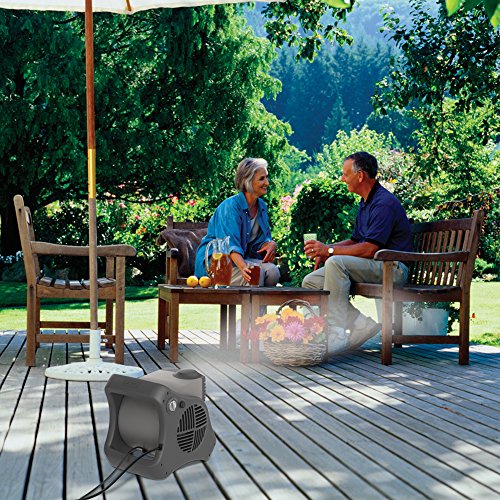 Simultaneously, the unit’s fan creates a strong airflow, which dissolves the moisture in the surrounding atmosphere. At its top speed, the Lasko Misto 7050 can revolve as fast as 298 cubic feet per minute. It also has a button for activating the 90-degree oscillating motion. This allows the unit to run independently or along with the three-level mist spray.

Lasko’s Max Performance U15701 floor fan is a little different from the previous example as it functions in the opposite way. The floor fan not only cools and improves ventilation but also dries the air. You can adjust the fan to pivot down or up according to where you have to direct airflow.

Max Performance U15701 is ideal for places that are hot and humid. It gives you the option to choose any of three fan speeds depending on the degree of heat in the atmosphere. You can change the fan speed by simply turning the dial. At the lowest setting, the fan produces an airflow rate of 274 cubic feet per minute while the highest speed can notch up to 300 cubic feet per minute.

Amongst all the other fans, Lasko’s Blower Fan 655704 has the highest functioning fan and reaches a velocity of up to 305 cubic feet per minute. Similar to the previous floor fans discussed above, you can pivot the Blower Fan 655704 up and down, oscillating the airflow in the process. It also has a 3-speed dial for changing how fast the fan works.

Each floor fan model from Lasko generates the kind of powerful airflow  you would expect from a high-quality product. All of these models give you the basic features of dialing fan speeds and oscillating airflow direction. However, if you live in dry and hot surroundings, the Lasko Misto 7050 can cool your room effectively with its misting function.

People want to reduce their energy bills as much as they can. Let’s see how these fans compare in terms of energy efficiency.

Naturally, water and electrical appliances are not something people want to see alongside each other. However, the Lasko Misto 7050 floor fan has implemented necessary safety features to prevent any accidents. The Misto floor fan has a 9ft long ground-fault circuit interrupter (GFCI) power cord and is ETL-listed (which means that it follows all the safety standards in North America). 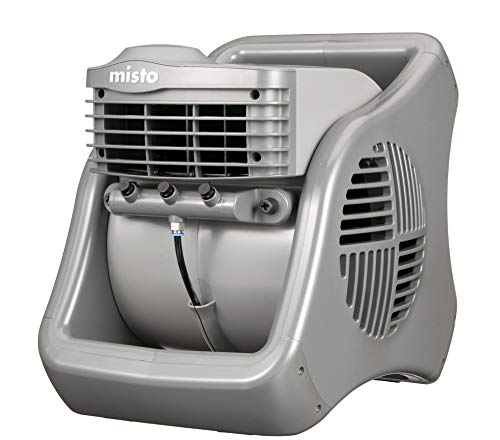 As a result, the fans misting function will not become a safety hazard for you. However, make sure you have the GFCI installed in your housing to put an end to electrocution hazards. Furthermore, the fan only consumes 120 watts despite its powerful airflow and additional features like water misting.

Although the Max Performance U15701 has no connection with moisture; it also has all the necessary safety features. The floor fan’s specialized three-pronged power cord has a grounding pin that eliminates the chances of an electrical shock. 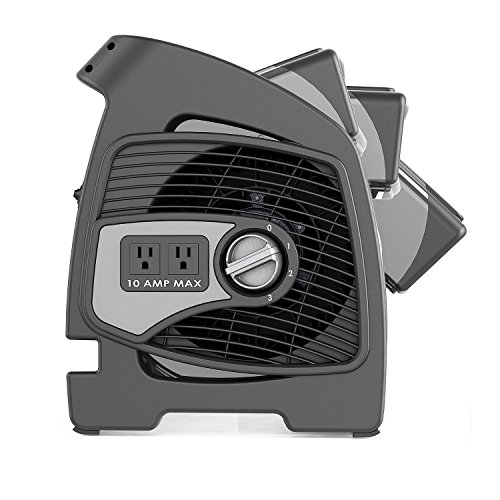 The power cord has a total length of 10 ft while the fan contains two 120-volt outlets on its side. Since the Max Performance U15701 generates a more powerful airflow, it also consumes a higher amount of energy, which can go up to 124 watts. At its lowest speed, it consumes only 98 watts of electricity.

Lasko’s Blower Fan 655704 contains a fused plug, which enables the fan to maintain a steady current. The power cord reaches the length of 9 ft, and the fan contains two grounded 120-volt accessory outlets. The Blower Fan 655704 strikes a balance between high performance and energy efficiency. At its highest, it only consumes 103 watts of energy while at the lowest fan speed it just uses 76 watts.

All three models take care of safety concerns in a floor fan. However, as far as energy efficiency goes, Lasko’s Blower Fan 655704 takes this round.

Another concern with some floor fans is that they can topple easily. Let us take a look at the construction of each of these fans:

To take care of the issue of toppling fans, Lasko has made sure that Misto 7050 has a low center of gravity. This floor fan has a sealed motor along with an elevated fan assembly. Considering the unit has to operate in heavy moisture environments, the unit is designed to resist rust along with ultraviolet rays. Moreover, the unit has an easy setup and maintenance. 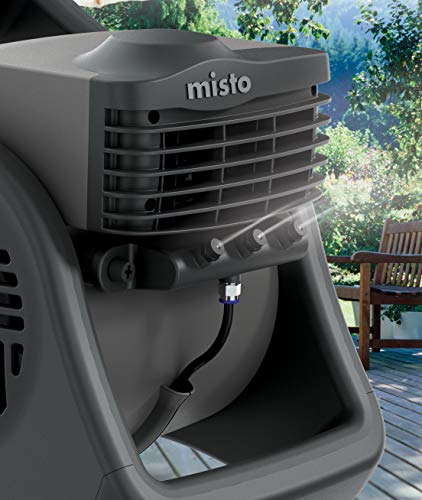 Similar to the model above, Max Performance U15701 has to work in an atmosphere with high moisture levels. However, both of them have completely opposite roles. Regardless, the unit also has anti-rust material along with a strong built-in carrying handle.

Another great thing about this unit is that it comes pre-assembled. You can just plug it in and start using it. Max Performance U15701 weighs 15 pounds, so it will remain steady even at its highest speed.

All models, including Misto, Max Performance, and Blower Fan, can endure years of frequent usage without rusting over time. However, the latter two units come pre-assembled, whereas it takes a few minutes to assemble the Misto 7050.

All of the Lasko’s models are high performing and durable. These floor fans can provide you airflow upwards of 300 cubic feet per minute. Besides that, users have the option to oscillate the airflow direction according to their will with the help of an easy-to-use dial. To round it off, all floor fans come with necessary safety features and durable casing. However, you can choose any of the three floor fan models according to your needs and preferences.