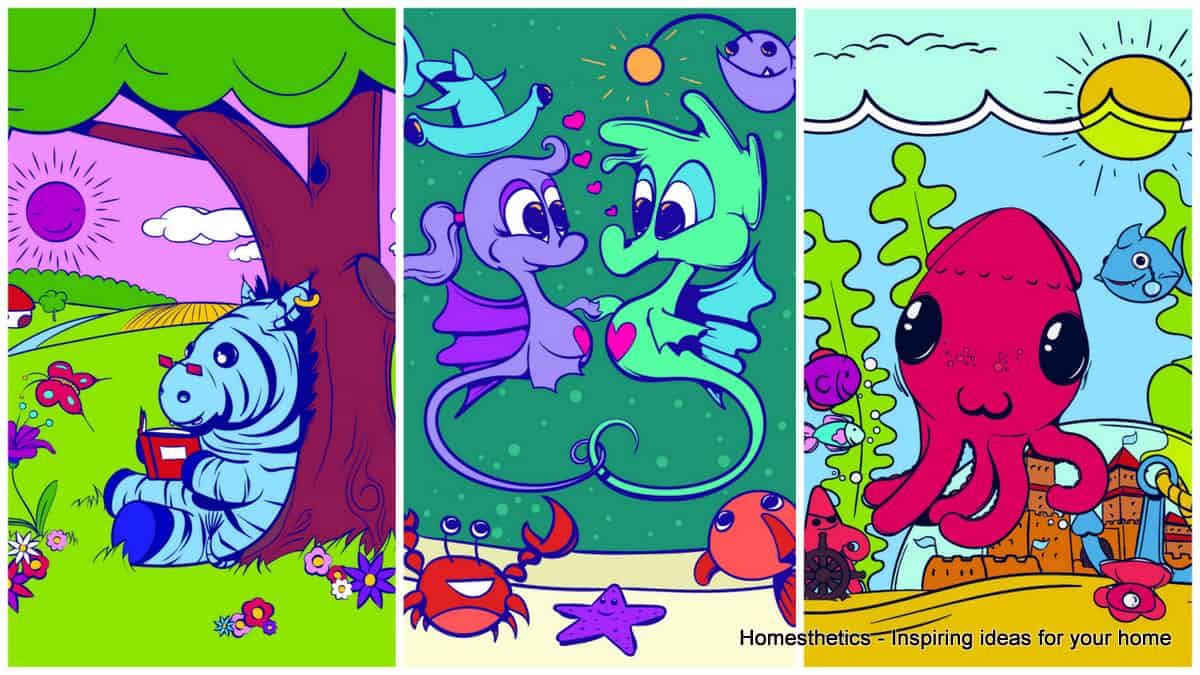 This feature is part of the “Things to Draw” Collection of drawings realized by Homesthetics Magazine in partnership with Designaissance Studio. The contents of the tutorial are copyright protected as it is the collection itself; if you are interested on sharing the drawings on your website or magazine please contact the magazine. Feel free to print or share the page for educative purposes as this is the definitory purpose of our mission with this collection.

It has been determined that drawing in the early stages of childhood can provide insightful knowledge into the crucial cognitive, physical and emotional development of a child. The actual act of drawing is chosen by all young kids as a creative expressive manner of externalization and engaging the developing intellect and the entire body in general. If you ever opt to simply observe a little one drawing you can notice how his concentration is expressed with his entire body, the activity being one extremely engaging and appealing to young and adults alike. With this idea in mind, Homesthetics in partnership with Designaissance has started the Cool Things To Draw Collection, a creative method of immersing into the colorful world of basic illustrations able to inspire and to offer guidance in creative representations of the imaginative. Cast a glance and stay tuned for more creative, fun and playful drawing guides ! 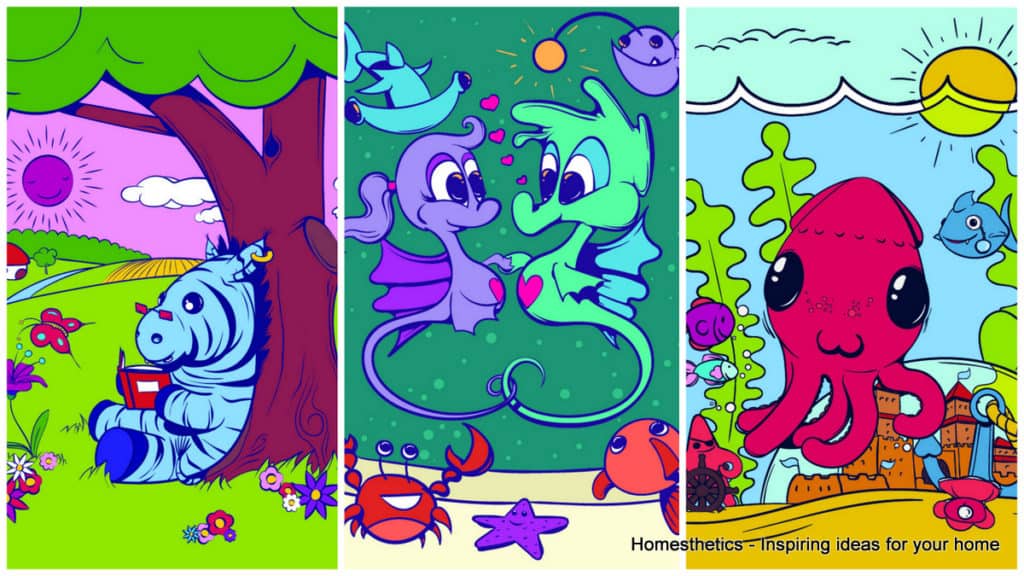 1. Learn How to Draw a Deer– Cartoon Scene Step by Step Tutorial

We felt it was only natural to start with a beloved childhood character: Bambi. Animals represent a great mediator between the natural environment and your little one, able to form relationships, bonds and inducing a sense of responsibility in the process of taking care of one another. They are also a good start for the representation phase your kid goes through in creative development when shapes become more realistic and tend to slip towards depicting the natural environment rather than the fairy land of fantasy. Start with basic shapes, followed by the setting of axes that will determine the essential anatomical parts of the deer and end with adding a colorful natural scenery that will place the animal in the proper context. Use bright colors and be imaginative when it comes to the vegetation.

2. Learn How to Doodle – Cartoon Scene Step by Step Tutorial

Doodling is a fun activity undertaken by most of us in hours of boredom. Nonetheless, the creative act is one of imagination, allowing to merge different shapes, colors and characters into unlikely scenes.You can start by expressing a simple fun character evolved from a basic primitive form like a circle and keep adding more and more elements to the painting.You can try and combine the characters in a fun fantastic imagery where color and details create a complex work of art.Teach your little one the importance of detail in art and life in general and admire and praise creativity and imagination.You can never go wrong with doodling.

3. Learn How to Draw a Butterfly on a Flower – Cartoon Scene Step by Step Tutorial

Butterflies and flowers are essential primal elements attempted to be depicted by kids in representations of the natural landscape. The delicacy and complex colorization of a butterfly might seem like a difficult job for a toddler but the idea is not of exact replication of the existent but rather the understanding of the shape, form, the abstraction of the idea of a butterfly. Flowers come easier to represent. Try and teach the rules of symmetry and proportions on such small elements that are perfect in their creation.

4. Learn How to Draw a Sunflower and a Snail – Cartoon Scene Step by Step Tutorial

It is impressive how simple forms can be translated into complex natural elements that compose the surrounded world. No matter the scale, the natural replicates the same structure on and on, forming complex and intricate relations that generate the wonderful beuaty of the natural. Below the miniature world of a snail has been cartooned to depict a fun perception of this small environment.

5. Learn How to Draw an Owl– Cartoon Scene Step by Step Tutorial

Owls are delicate majestic creatures frowned upon due to their preference for living in the cold night yet their perfect symmetry and beauty cannot be denied. Two circles intertwined start the base form of this drawing that transforms into a cute funny owl by adding more and more curved lines to form the impressive eyes and the feathers. Place it in a green environment and don’t hesitate to add other fun characters to the scene. Color is an essential part of the end design and using vibrant rich colors will spark the interest of your little ones.

6. Learn How to Draw a Zebra – Cartoon Scene Step by Step Tutorial

Zebras are curious animals, representing the perfect duality between dark and light, night and day, white and black. The representation of such a character might be the right motif for teaching your kid the mentioned duality of life whilst keep things casual and fun. The colorful environment surrounding and placing the zebra in its context will contrast beautifully with the main character. The below drawing depicts the zebra in a posture expressing human behavior as a creative parallel of understanding and comprehending the animal by comparison.

7. Learn How to Draw an Octopus – Cartoon Scene Step by Step Tutorial

You can immerse yourself and your kid in the unexplored mysterious underworld, filled with colorful interesting characters. A colorful octopus has been depicted in a lively environment associated for a better understanding with the miniature world of a fish tank in a vast immensity of an ocean and as a parallel to the importance of freedom for animals and their protection in their natural habitat. Reflect the vast world in a variety of tones and contrasts that will inspire and allow creativity to run free.

8. Learn How to Draw a Mouse – Cartoon Scene Step by Step Tutorial

The classical chase of cat and mouse of the beloved cartoon Tom and Jerry will remain a fond memory for most of us. We have tried to capture their complex and fun play in a single character that plays a double role, being placed in a homey mundane environment.The creation can be understood on a multitude of levels and explained to your kid depending on his age and understanding capacity. For the young toddler the cartoon will represent a fun method of expressing his loved characters in a colorful creation.

9. Learn How to Draw a Seahorse – Cartoon Scene Step by Step Tutorial

Another cute creative character from the sea world has been brought to life in this marine themed drawing. You can once again start from the basic circle and work your way around it to form and add complex colorful details to the creation. You could even merge the octopus with the below featured creation if you feel adventurous to form a complex vast marine environment. Use the two characters to explain the concepts of friendship, closeness and difference by determining your little one to add personality to each individual.

10. Learn How to Draw a Mushroom – Cartoon Scene Step by Step Tutorial

We end our cartoon scenes with another natural environment captured in its various, complex essence, a miniature scale depicting the natural course of life at a different level.The intricate world of mushrooms and their internal logic of functioning and developing in the forest, along with the vital role they have to play in the environment will represent a wonderful lesson for your children. Dive into the natural world and you will capture their interest and attention whilst stimulating their creativity and imagination.

Further on we will go deeper into the intricate and complex roles drawing plays in a child’s development.

The act of scribbling becomes a focus of attention for toddlers around 18 months, helping in muscle coordination, wrist and finger movement, coordination and general physical development. The child will exercise his cognitive abilities and will interact socially, learning meanings of shapes and marks. In time, his technique will improve, rhythm will take over and engage his entire being into the act of drawing. Full control of wrist movement will be achieved later on the evolution ladder but by scribbling, the toddler will learn how to grow from grasping a pen with his entire fist to holding it the proper healthy way. You must be aware of the fact that the end product of scribbling is important for the toddler as well as the process itself. Colors and lines spark their interest and later on, the shapes they have created will become their own signature. Later on, the act of scribbling represents autonomy, they have the ability to choose their own colors, lines, shapes, crayons, paper, learning essential steps in the process of making rational decisions based on preferences and becoming independent.

Between two and three a child has developed enough to create shapes, primitive circles, squares, triangles and by the age of three the child puts together several shapes to form what Kellogg termed aggregates.These aggregates represent the first step in the reaching of realistic drawings which will usually be a primitive person, a tadpole formed out of a circle and two lines that form the legs. The details may be placed or not on the circle, arms might not be used unless necessary. This should not be understood as a lack of understanding of the human body and its existence but rather as a conceptual interpretation of a persona, a personal manifest of apprehension and a method of conveying a human being as a hole. Around age nine body proportions appear in the interpretation of human shapes, completing the concept begun as a toddler.

Association is a technique used in language skills and arts alike. We tend to conceptualize items and ideas in order to better understand and comprehend their meaning and role in life, as well as associate them with certain memories and ideas. Around age three or four young children tend to create generic symbols for representing repeating elements in their drawings: trees, birds, the sun, the house, people, beginning to show signs of realistic representation of the world as they perceive it. Most often than not the impossibility of the world expressed such as representing both the inside and outside in the same picture is the key to challenging their mind and imagination and stimulating creativity.

Concrete operational thought manifests after the age of eight when kids tend to represent the world in a more realistic manner, leaving imagination and creativity behind. Perpective, proportions appear in the equation and the skill demonstrated at depicting them will encourage the little one into pursuing arts in the future rather than giving up in an early stage.Confidence is key in creative development so the act of encouraging children, offering them positive feedback along with guided technical drawing instruction in middle school years is essential for those who exude passion and intuition for creative arts.

How to encourage and promote drawing

As we have seen, drawing plays a vital role in early years of development so lets decide on a few methods of encouraging and promoting drawing as art.

In conclusion, the simple act of drawing or rather scribbling at an early age will promote physical and cognitive development whilst encouraging social interaction, creativity, autonomy and confidence. Admiration and early encouraging will help in forming a future great artist. Creativity and skill should be praised and understood as a wonderful asset and an incredible method of releasing stress, expressing emotions and being free.